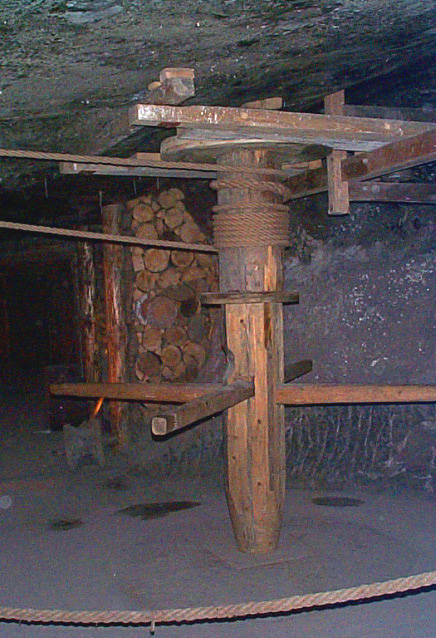 For the danger posed by landmines, see War zone safety.

This is a travel topic that deals with all man-made structures under and above ground whose primary purpose is or was the extraction of natural resources as well as their remains, associated culture and small scale resource gathering such as gold panning from rivers and creeks.

Humans have dug more or less elaborate holes in the ground in order to extract resources since time immemorial. The oldest things archaeologists interpret as mines were found in modern day Egypt and were used to extract flint-stone some 30,000 years ago. Since then both the need for resources and the technology with which to extract them have experienced tremendous development. Modern-day open pit mines have transformed whole landscapes and once they are done removing all the desirable resources, they often leave man made lakes and ponds that can become a source of economic activity and tourism in themselves. While some active mines can be visited, most mines are closed to the general public with only a small visitor center if anything. However, some former mines have been converted into tourist attractions and you can learn a lot about the history of the region or of mining in general by taking a guided tour.

Some towns owe their existence or at least their current size to mining, be it Kiruna and Falun in Sweden, Norilsk in Russia or continued human presence on Svalbard. On the other hand, many former mining communities have been deserted once resources run out, and bustling cities can become ghost towns overnight. In some cases a mine itself is the reason for the abandonment of settlements, either to make room for open-pit mining or due to environmental damage through mining.

Mining has also added its own rich character to the cultural heritage of many regions, from the vocal imagery of the powerful folk ballad to the literary works recording old miners’ myths.

Mining and the associated culture – especially in the context of coal and steel – have also influenced things as seemingly unrelated or trivial as the names or nicknames of sports teams. Many areas – especially in high-income countries – that used to depend on mining have since entered a decline, and despite efforts to diversify the economy, many of those areas have become “rust belts”. That said, people are often immensely proud of the mining heritage of their region and some even continue to live those traditions after having moved elsewhere for a job.

Open pit versus shafts and tunnels[edit]

Modern mining often involves open pits created by huge machines. Older mines dug by hand often involve deep shafts and adits (long narrow corridors) underground. For instance the silver mines at Kongsberg has the deepest point 1,000 m below the surface (several hundred meters below sea level). The intensive 1600s mining at Falun eventually resulted in a collapse of the underground sections, leaving a 100-m deep and 1-km wide crater. A major problem in (almost) all mining operations is water. In open pit mines groundwater has to be lowered, sometimes hundreds of meters, leading to ground movements that are still not entirely understood and that have in the past damaged houses and other structures several km away from the mine. Once the mining is concluded the rising groundwater also results in ground movements, which may further endanger property. In underground mines, water has to be pumped out and of course this water has to go somewhere. In some cases it is simply pumped into abandoned shafts, but elsewhere ponds have been created just from surplus mine water.

Salt was a valuable commodity for most of history and scarce in almost all inland regions. The very word “salary” is derived from the Latin word for salt. While sea salt played a role in some areas, it was then as it is now vastly overshadowed by mined salt. While the people in the North Frisian Islands burned the ground beneath their feet to access the salt contained in the peat, other regions had access to vast underground salt domes, which gave rise to fabulous wealth and to names often relating to former or current salt production, such as Bad Reichenhall with “hall” being a frequent component in city names in Central Europe related to salt mining.

Mothballed rock salt mines are considered among the safest options to get rid of radioactive waste through deep geological disposal of such materials. The crystalline salt is an excellent thermal conductor to keep the waste cool, and naturally seals cavities to prevent leakage of active materials into ground water. It is expected that at least some mines that are open to the public will be converted for such waste disposal purposes in the near future, making them inaccessible to mankind for the next 50,000 years. If you have an interest in visiting decommissioned salt mines, do it as soon as you can.

Quarrying is extraction of inert bulk minerals, such as stone and gravel. While toxic pollution is less of a concern, they can be enormous in size (even the pre-industrial ones) and cause landslides. As their products are expensive to transport, they tend to be near population centers. Historically stones were only transported long distances in exceptional circumstances or when a convenient water route was available. As such, the stones used in pre-industrial buildings often serve as a rough “geological map” of the area.

Every state of Australia has a mining history, and in most states there are former mining sites…

Covishield, Covaxin to get full approval but won’t be retailing

Babus try to hush up Bengaluru near miss, probe ordered

Covishield, Covaxin to get full approval but won’t be retailing

Babus try to hush up Bengaluru near miss, probe ordered