Their strategy was revealed in a massive rock-paper-scissors tournament at Zhejiang University in China, documented on the Arxiv server.

Scientists recruited 360 students and divided them into groups of six. Each competitor played 300 rounds of rock-paper-scissors against other members of their group.

As an incentive, the winners were paid – in proportion to their number of victories.

To play smart, classical game theory suggests players should completely randomise their choices – to remain unpredictable and not be anticipated by opponents.

This pattern – where both players select rock, paper or scissors with equal probability in each round – is known as the Nash equilibrium.

The strategy is named after game theory pioneer John Forbes Nash Jr, subject of the 2001 Hollywood film A Beautiful Mind.

How to win at rock-paper-scissors 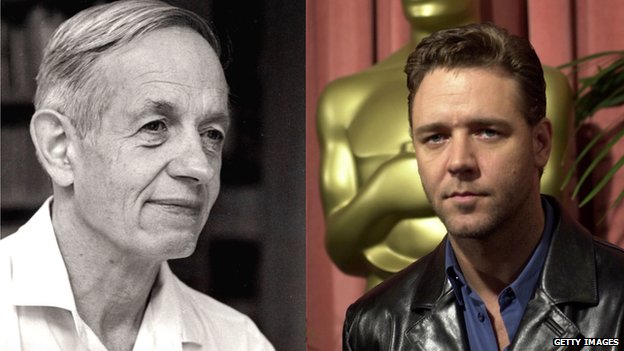 And indeed – in the Chinese tournament players in all groups chose each action about a third of the time, exactly as expected if their choices were random.

However, on closer inspection, the organisers noticed a surprising pattern of behaviour.

When players won a round, they tended to repeat their winning rock, paper or scissors more often than would be expected at random (one in three).

Losers, on the other hand, tended to switch to a different action. And they did so in order of the name of the game – moving from rock, to paper, to scissors.

After losing with a rock, for example, a player was more likely to play paper in the next round than the “one in three” rule would predict. 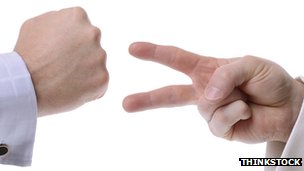 What are your odds of winning rock-paper-scissors? Simple – one in three. At least, that’s what chance predicts.

But people do not play randomly – they follow hidden patterns that you can predict to win more games than you should, a study has revealed.

Winners tend to stick with their winning action, while losers tend to switch to the next action in the sequence “rock-paper-scissors”.

Anticipating these moves could give you a winning edge, say scientists.

This “win-stay lose-shift” strategy is known in game theory as a conditional response – and it may be hard-wired into the human brain, the researchers say.

Anticipating this pattern – and thereby trumping your opponent – “may offer higher pay-offs to individual players” they write.

“The game of rock-paper-scissors exhibits collective cyclic motions which cannot be understood by the Nash equilibrium concept.

“Whether conditional response is a basic decision-making mechanism of the human brain or just a consequence of more fundamental neural mechanisms is a challenging question for future studies.”

Though it is only a simple game, rock-paper-scissors is seen as a useful model for studying competitive behaviour in humans – in financial trading for example.

A previous experiment found that players unconsciously mimic the actions of their opponents – a surprising result because advantage is usually gained by acting differently.

The Chinese scientists now plan to investigate the underlying psychology behind the seemingly irrational choices players make when competing.

In the meantime, anyone curious to test if their “winning strategy” really works need look no further than the UK championship.