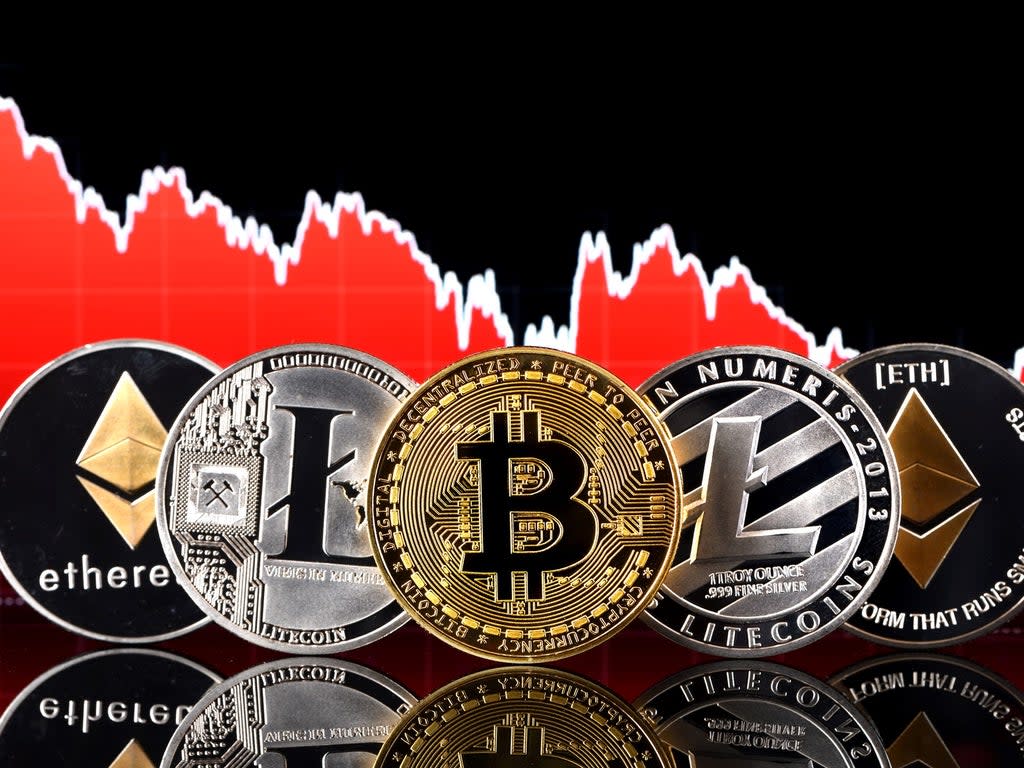 Bitcoin is teetering on the precipice of an abyss, according to some crypto market analysts, with its price hitting its lowest level since July 2021.

The cryptocurrency has lost more than 50 per cent of its value over the last six months amid a market-wide downturn that has wiped more than $1.5 trillion from the overall crypto market.

Since first rising above this price at the start of 2021, BTC has never fallen below it for any significant amount of time, meaning it will be in unchartered territory if the sell-off continues.

There is widespread fear in the market on Thursday, after the Terra (LUNA) cryptocurrency fell by more than 99 per cent, dropping below $1 on Wednesday having peaked close to $120 last month.

The crash has pushed another stablecoin, Tether, below its dollar peg hitting as a low of 95 cents.

You can follow all the latest news, analysis and expert price predictions for bitcoin, as well as other leading cryptocurrencies like Ethereum (ETH), Solana (SOL) and Cardano (ADA), right here.

ICYMI: Chelsea Football Club have announced a new sponsorship agreement with the owners of digital asset platform WhaleFin. The Premier League side will display the logo of the exchange on the sleeves of both men’s and women’s shirts from next season.

Chelsea say their partnership with Amber Group will see them “collaborate on a range of partnership activities which will focus on growing the WhaleFin brand globally”, while highlighting WhaleFin as “an all-in-one platform that serves as a gateway to crypto finance”.

The Blues join a rising number of top-flight clubs in England who have branched out into the world of digital assets and cryptocurrency, after Liverpool launched a range of NFTs last month and Arsenal last year saw their fan token adverts banned for taking advantage of consumers’ inexperience in cryptoassets.

Terraform Labs says it has halted activity on its Terra blockchain after its TerraUSD and Luna tokens collapsed, according to Bloomberg.

“The Terra blockchain was officially halted at a block height of 7603700,” Terraform Labs tweeted on Thursday.

Luna fell in value to almost zero cents, while TerraUSD, which is also known as UST, fell to around 36 cents.

One user said the millions they had invested in the Luna cryptocurrency were now worthless.

“My 2.8 million dollars is literally worth $1000”, they tweeted, adding “Man bought the dip and lost:

“The extreme volatility that we’ve witnessed across the cryptocurrency market over the past 24 hours is demonstrable of just how nascent the technology is. The capitulation of Terra Luna and the issues that we see with Terra’s dollar-pegged algorithmic stablecoin UST are part of the growing pains of a space where innovation charts a course at a frenetic pace”, Bitfinex Market Analysts told The Independent.

The real story of the day is the relatively strong performance of the three leading cryptocurrencies, bitcoin, Ethereum and Tether tokens (USDt). The trinity stands strong, demonstrating the strength and resilience of a digital token ecosystem that will define this entire decade.”

Binance has announced warning measures against the Luna cryptocurrency.

“Due to the existing tick-size constraints of the LUNAUSDT perpetual contracts, Binance Futures will take the following precautionary measures”, the company wrote in a blog post.

“Should the price of the LUNAUSDT contracts go below 0.005 USDT, Binance shall proceed to delist the contracts. Any further information including the delisting time will be announced accordingly.”

Many people are criticising celebrities like Larry David and Matt Damon for appearing in ads promoting crypto without properly explaining the risks.

“History is filled with ‘almosts,’” Mr Damon said as he breezes past a Christopher Columbus-like figure.

“With those who almost adventured, who almost achieved, but ultimately for them it proved to be too much. Then, there are others – the ones who embrace the moment and commit.”

Tether, another stablecoin, dropped to a low of 95 cents by early Thursday morning.

As the largest stablecoin, it is a foundational part of the cryptocurrency ecosystem. It is the first time it has dropped below $1 in two years.

Like all stablecoins, it is supposed to maintain its price to fiat currency. One tether should always equal $1.

“The lack of transparency provided by Tether on the quality of commercial paper they hold to back the peg made it the obvious next target,” BCB Group’s Usher told Reuters

“However, Tether is a very different animal to Terra, with a more proven ecosystem and I have far more confidence that when volatility subsides it can regain its peg and stability,”

Eight days prior to the crash, Do Kwon said: “95% [of coins] are going to die, but there’s also entertainment in watching [them] die too.”

Do Kwon, the founder of the Luna cryptocurrency, has a history of mocking people for not investing in his coin.

Luna has recently dropped nearly the entirity of its value, dropping below $1 on Wednesday having peaked close to $120 last month

“Five years ago, people who were in crypto were crypto people,” said Mike Boroughs, a founder of the blockchain investment fund Fortis Digital. “Now you’ve got guys who are across the whole span of risk assets. So when they’re getting hit over there, it’s impacting their psychology.”